UDPATE 2016-08-01: It turns out there is a very technical article on Facebook written by Eric Cheng, the Head of Immersive Imaging at Facebook describing this very thing. His article is quite technical (and also includes info on spherical panoramas) and while it does mostly mirror my findings, it's a long-winded way of describing what I ultimately explain how to do very simply. So if you're looking for a how-to, jump to the end of this article and follow the few simple steps!

Facebook's new panorama feature is pretty cool. If you haven't seen it, a pano uploaded to Facebook shows as a scene you can not only pan around with your finger, but actually tilt and turn your phone to explore. Neat!

I tried uploading a panoramic I'd created in Lightroom, but it only showed as an ultra-wide photo in Facebook, and not as an explorable panorama. The general consensus among my friends on Facebook was that only smartphone-shot panos would load in Facebook properly. To this I thought, “there must be a way around it!”. I figured what was needed was to trick Facebook into believing that a photo came from the iPhone, even if it didn't.

Facebook could be sniffing the file any number of ways… EXIF data stating camera make or model, resolution, pixel height, and so-on. So I set out to “crack the code”, as it were!

I'm writing this post as I experiment… it's the easiest way to keep track. So it's potentially quite long… and really only relevant to the curious. The end result can be found at the end of the post!

Knowing if a panoramic will display properly in Facebook

First off let's look at how you know if a photo will work as a facebook pano or not. When you load a photo in the iPhone app, you'll first see a little globe icon on the thumbnail telling you that it's a pano: 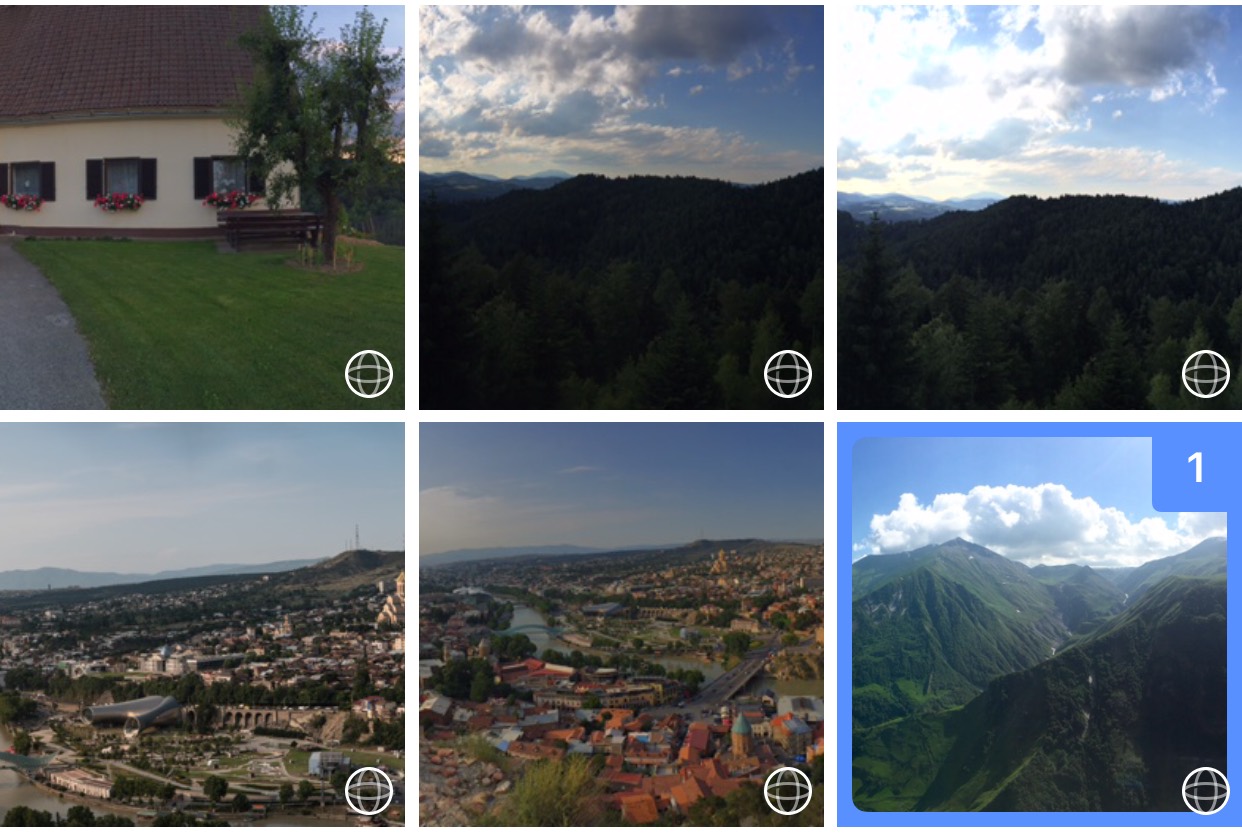 Once loaded, you'll again see this globe icon on the wide image. If you don't see the globe at this point, that means that while originally Facebook saw it as a panoramic photo, now that it's loaded, it's not going to display as one. 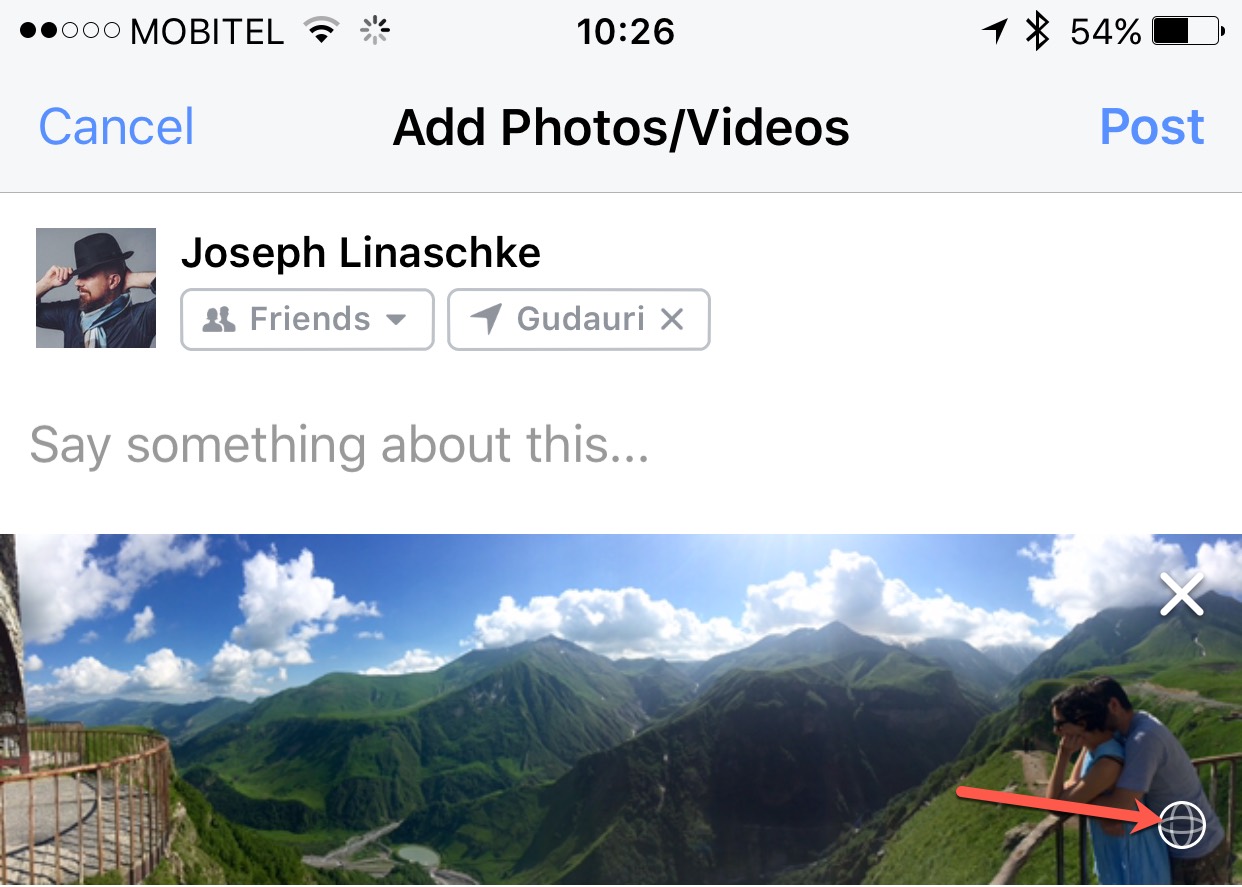 Once loaded, this icon must show up again for Facebook to display it as an explorable panoramic photo. If you don’t see this, all you’ll get is a super wide photo in your feed.

Now that we know how to tell if a photo will work or not, it's time to make a photo that won't work, work!

(Head's up… this is gonna take a while…)

Thanks for getting to the bottom of this. I recently uploaded a LR Panorama to Facebook and wondered why it didn’t display as a Panorama. Now I have the answer.

Incidentally, I read all the way through. On page 4 of 5 I thought I found a typo (“(it won’t; I tired)”. But maybe you really were “tired” at that point.

haha, I probably was tired! But thanks; fixed now.

You missed a step… file must have a height of 3,082 or less. Scale your file down and it'll probably work!

Does this still work?

I have some panoramic photos taken in Antarctica that aren’t showing to their potential in Facebook. I’ve changed the metadata, changed the aspect ratio and height, uploaded to my iPhone 6. They show in photos under panoramas with the wide angle icon in the bottom right but they don’t all the tilting view that ones taken on the phone allow.

I don't know… haven't tried in a while. I don't have a pano on my system to test with. Sounds like you hit all the major points, and if it's showing the icon in Facebook it sounds more like an app thing. Can you try another device? Or paste the link in here (be sure to make it a public post) and I'll try it.

Here you go try this one, not adjusted yet but if you get it to work let me know and I can adjust the others

That's just showing up as a super wide photo. I'll try on myself and see what happens.

Yep, mine worked. You can see it here. This one was so wide that Facebook thinks it's a full 360˚ panorama, funny!

If you want to send me the photo you're uploading via Dropbox or something, paste the link here and I'll look at the source to see if I can figure out what's missing.

Heres one of the photo files via a dropbox link. Totally unedited, let me know how you get on.

Change the EXIF and it'll probably work. Go through the final checklist again; it explains how and what to change it to.

Yeah it’s unedited but when I change the EXIF file with apple and iPhone 6 Plus or iPhone 6 it doesn’t work.

if you edit it does it work?

This is amazing! Do you think it can be done even for other types of pictures, like illustrations or paintings, and not photos?

I don't see why not… pixels are pixels!

The Exif Editor app linked in the article doesn’t appear to be in the Mac App Store anymore. But I found one called Photos Exif Editor for $0.99 that did the job.

Im hoping it can be done to any 360 camera available in the market. Comparability is important.

And I have a problem. Quality my picture is very-very terrible on FB. Here are the exif data:

What is your opinion?

I find the solution! The jpg format setting was Hoffman codes. I changed it progressive, and the quality of uploaded pano is excellent.

That is awesome! How did you change this?

I use ACDSee, the details of conversion are optional.

Joseph, I have another problem. My photo 360 degree exactly, but not allowed the hole rotation on FB.

I try change the aspect ratio, but did not succeed.  I show this problem on the attached photo:

thanks for figuring this out. I have found a free EXIF fixing website that did the job

Thank you so much for sharing this! I’ve been frustrated and trying to find a way to make this work for a while!