Hi folks - this is Kevin from Macphun. Thanks for supporting PhotoApps.Expert; we’re grateful to Joseph for the opportunity to hang out our “shingle” here and participate in the conversation… ;-)

Macphun makes photo editing apps that run as either a Standalone OR as a plug-in to host software like Lightroom, Photoshop or Aperture (and we intend to make our tools available to Photos for Mac as soon as the Extensions SDK for editing becomes available!).

PS:  FYI, we’re beginning to introduce a new feature into our software, called the Macphun App Center - it allows our users to easily pass images between our apps for further editing… 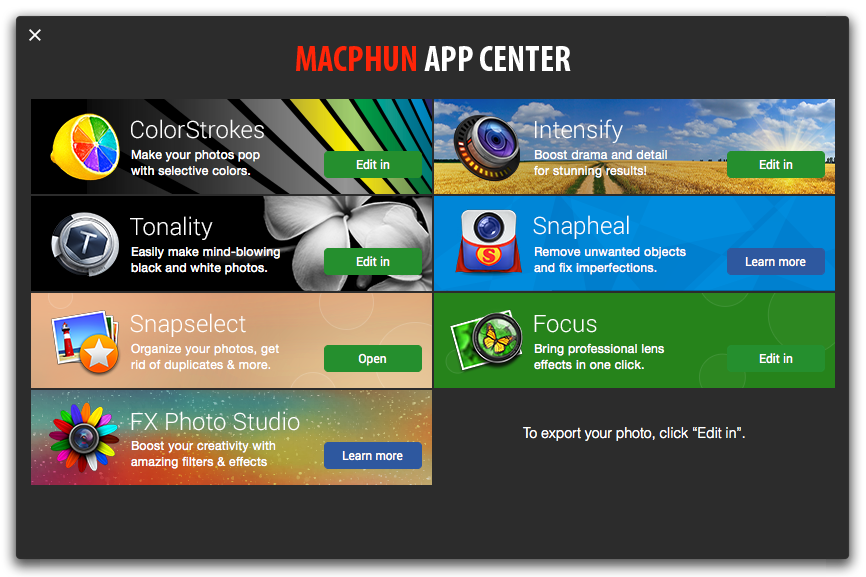 Hi Kevin,
Macphun apps are truly awesome. I access Tonality Pro and Intensify Pro mostly as a plugin in LR, but on occasion use the standalone function. One aversion to using standalone is the file open process has only a small thumbnails so it is a bit more challenging to see which file I’m opening for sure.
Thanks.

Ahhh… good point about the thumbnails - what I usually do it just hit spacebar to enlarge it to make sure it’s the one I want.  As an aside - and on the standalone front - I will often use our Snapselect app to choose photos I want to edit from any given session. It gives you some nice preview and compare features, plus helps with sorting thru duplicates and similar images.

Thanks for the comments, David! Have a good w/e.

Thanks for the tip about pressing the spacebar to enlarge the thumbnail.  It should have occurred to me to do that.  :-)

Hi Kevin,  I really like your software. I’ve purchased your Pro apps in Creative Kits Plus and use them both stand-alone and as plug-ins in Aperture. I know many of us our disappointed that Apple is no longer supporting Aperture, however, I hope MacPhun will continue to do so. I plan on continuing to use Aperture for now and would hate to discover that your apps and updates will no longer support Aperture.

You’re making great photographic software. I’ve just started to test your Noiseless trial and find it quite good. I find that it tends to soften the image as I would expect but it would be nice to be able to bring out some of the detail. I haven’t tried bringing a photo altered in Noiseless into Intensify Pro to see if it will allow me to bring out some of the softened detail. Perhaps you’ll have a tutorial on your site once the full version is released.

Hi Mike - thanks for the kind words.  I have a couple of thoughts:

1. If you’re using the Pro version, try to apply noise reduction on your RAW files. The algorithms have been tweaked for the best results possible.

2.  The Pro version also adds a new Details pane, in addition to Structure. Both of these utilize code from Intensify to help you retain sharp details.

3. The Filters pane lets you reduce the amount of noise reduction (NR) based on tonal range. Sometimes you want to decrease NR to help keep the photo a little sharper - plus, as you recognize, a little noise can often help a photo look… well… more “photographic.” ;-)

4.  Finally, if you want to be way more precise on the selective NR, run the Pro version as a plug-in. Use the Quick Selection wand to select exactly where you want to apply NR, then copy your layer before going into Noiseless. Anything you do while in the plug-in will only be applied to that selection (back in PS).

So…  there’s your “mini-tutorial”!  ;-)  I will try to find some time (or a smarter person than me) to do a specific tutorial on this too…

Thanks again for the question, Mike!  Cheers, Kevin

Sorry for the late response, I just stumbled across this poll in the process of looking into Noiseless.  My personal preference is for plugins (smoother workflow than going in & out of a half dozen different apps).

Thanks Eric - the standalone Macphun apps have a nifty way to pass images between them which is also a fairly smooth workflow.  Give it a whirl and let me know what you think.

Plugins! Love them! The workflow is really simple…

I don’t disagree!  Thanks Anders…

I use Snapheal,Noiseless ,Tonality and Intensify as standalone.

Have now started to use them in Photos.

Snap heel,Noiseless and Tonality appear as extensions in Photos but Intensify does not.

Am i missing something or have i got it wrong?

Have you tried manually installing them by going to System Preferences > Extensions?

Make sure that you’re using the standard Mac App Store version of Intensify and it’s updated to the latest.

Otherwise, I’m tapped out… you’ll need to contact support@macphun.com or call us (number on the website; I can’t remember it right now). They run 24/7 so you should get pretty fast service. ;)

Thanks for the help.I was running version 1.0.4.

Updated at the App store.

Then when i tried to download kept getting (error their is a fault) Try again from Purchases page.

Went round this route to no avail. Then opened the the Intensify page within App store clicked the Download button and eureka all is well.

Do not understand what happened but now have the program working.

Wow… that’s truly weird. Glad you’re up and running and thanks for sticking w/ the mission there to resolve!  Kevin

Plugin in the main but stand-alone has its uses.

What I would like to see is the ability to save an edited image back to, say, LR so that it can be opened later to continue with the edit and with all sliders as they were when it was first saved. For instance, Intensify lets me save an image that can be reopened in such a manner (with all layers present) but not back to LR. On One manage this by using the PSD file type.

And what would be really, really great is a Macphun image management app, one that is as fast as Snapselect and that does not force its own file structures on you. I am not a fan of Apples offering and for most of us LR is overkill - of course CK would have to edit RAW files.

The results from your apps are often astounding. Great stuff!

Thanks Colin - this is terrific feedback. Our software does export PSD files, but the layers get smooshed to a single flattened image. I wasn’t aware that on1 could preserve layers starting with their standalone.

A workaround would be for the plug-ins to work as a Smart Filter in Photoshop, right?

Thanks for the kind words!  Kevin

Smart Layers in PS would work but of course only if you have PS. On One converts the LR file to PSD processes it and then returns the unflattened PSD to LR so it sits beside the original RAW file (or whatever it was).

Tried Intensify in Smart Layers and whilst it works it preserves nothing not even whilst in PS. So if you decide you want to tweak the Intensify file and open it from the PS smart object you do get sent back to intensify but all previous edits have disappeared, so one is back to square one.

Having it all work from LR (or any other DAM) is the way to go for products like yours are going to make PS redundant from a photographers viewpoint. I only have it because I have CC. Decent integration with any DAM would render PS unnecessary - why not your own, build on the back of Snapselect, whilst bringing the link with Apple Photos and LR up to speed?

ON One certainly wins on integration. Results wise it is Macphun every time :-)

Can we have Intensify, Tonality & Noiseless on iOS?

I’ll pass that along, Krakatoa!

Native host software + plug-ins, to keep all the photos together in an organized library.