Migrating an Aperture Library to Lightroom; The Good, the Bad, and the Ugly

For a long time, readers have been asking me to go through the migration process from Aperture to Lightroom. I've ignored these requests, preferring instead to explain alternate options and my recommended way of handling the demise of Aperture. Today, however, I decided to record a video documenting the process.

Now I know why I resisted for so long.

I created a reasonably complete Aperture library, containing everything I could think of. Below, you can see a screenshot of the library I imported. In the migration test, I included different types of previews generated in Aperture (none, small and full size), Managed and Referenced photos, adjusted and non-adjusted photos, Folders and Projects and Albums and Smart Albums, (I neglected book projects, but we also know these are completely not supported), Faces, Places, and a variety of metadata such as Star ratings, Flags, Color Labels, IPTC and so-on, as well as Stacks and RAW+JPEG pairs. 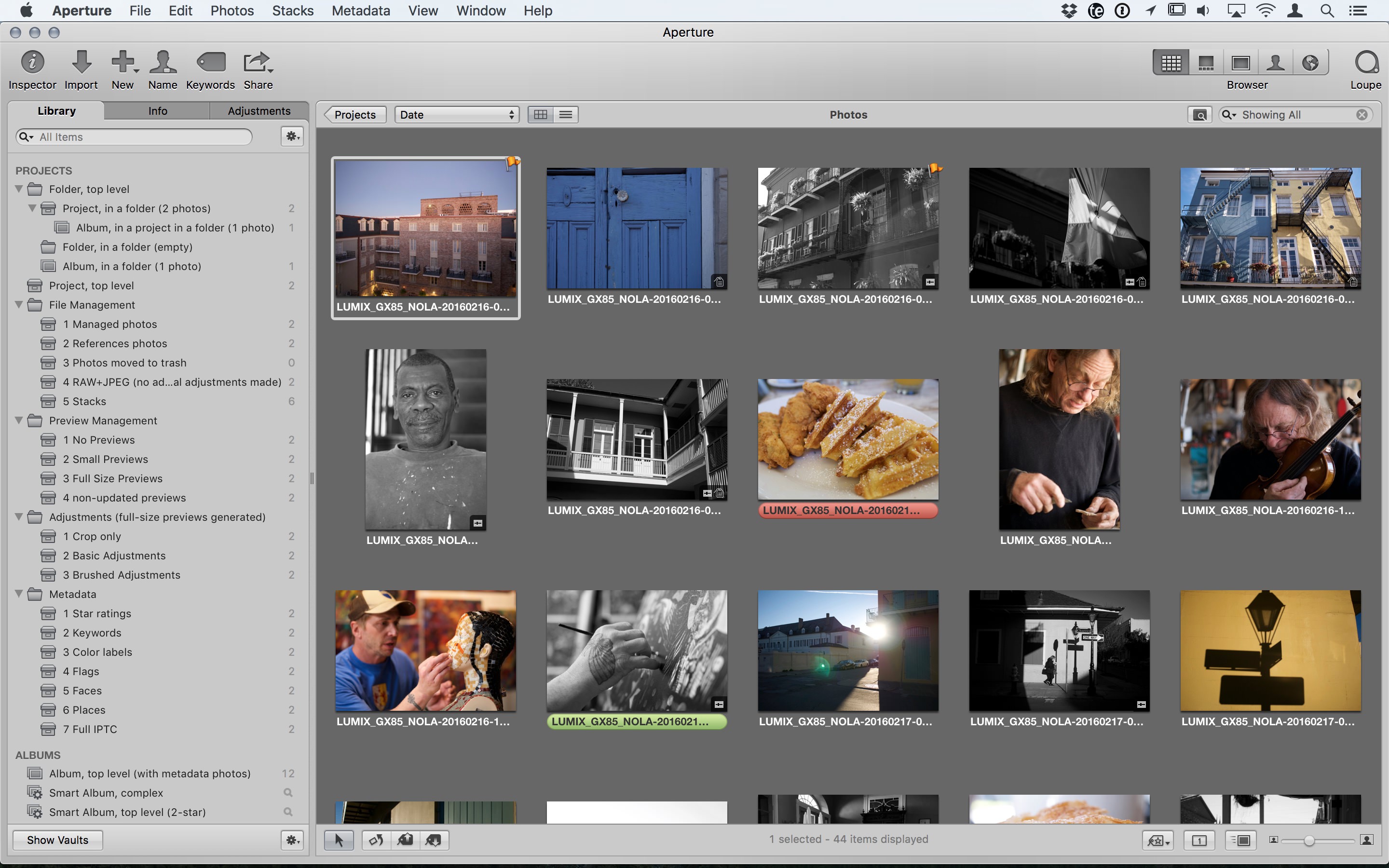 In some cases, the results were fine. In many, not so much. Management of RAW+JPEG is a disaster, Stacks are something you'll wish you never relied on, and adjusted images? Well, let's just say that now that I've done this, I know why every tutorial I could find online skipped the part where you actually explore the Lightroom library after migration. Seriously. You'll see in this video where I stop recording to go figure something out, and come back an hour later (don't worry you're not watching an empty room for an hour!) — extremely frustrated at the lack of good information online. 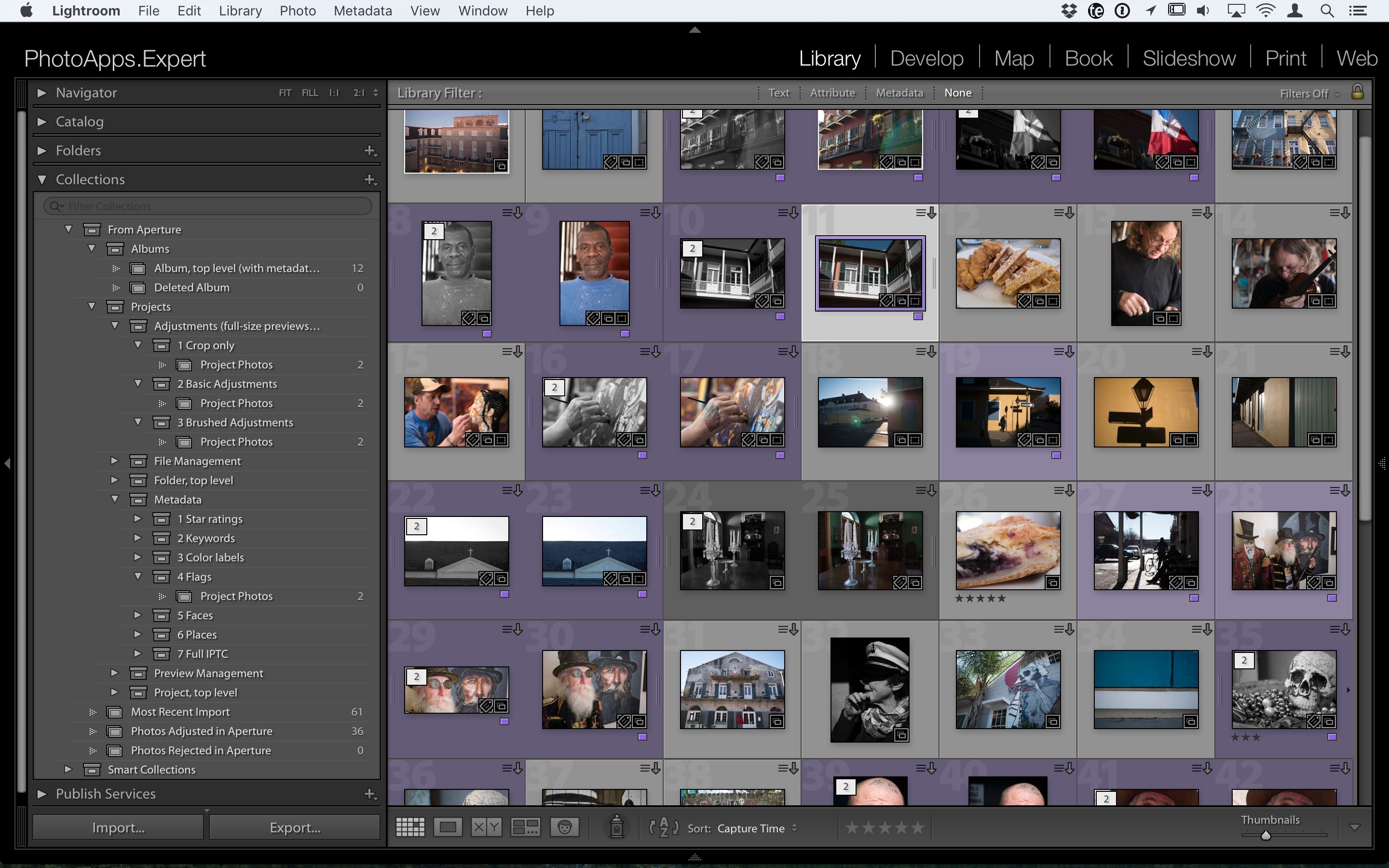 The Aperture library, imported into Lightroom

Hopefully, this video will provide the information everyone has been asking for.

By the way, I want to make one thing clear… I do not blame Adobe for the way this is done. Well, except for RAW+JPEG handling. That's definitely on them (I've made my opinions on that very clear). Clearly they can't bring in Aperture adjustments; the mechanisms are just too different. How they handle the imported adjusted JPEGs though… could be better. Anyway. Shall we begin?

Also, here's my old video on my recommendation on what to do — to not migrate your Aperture library to Lightroom — and why.

I can’t see the full video ‘Migrating an Aperture Library to Lightroom….’ even though I am logged in to your site.

I can just se the 33 second one telling me to login.

You are not a paid member, Dagge — this video is included in membership. Is that not what the short video that does play says? I need to make sure it's playing the right video!!

ok thanks. My mistake.

Joseph, Yes, using Lightroom’s migration for Aperture function is quite ugly especially if you have an extensive library with adjustments, smart albums, etc.  I used Aperture Exporter(AE) and before you made your Session Training 200 video and just bit the bullet and moved my entire Aperture Library over using AE which basically, if I remember correctly, copies the library before transfer.  So I still have my entire Aperture library in place separately as well as in my Lr catalogue. All of my photos were moved to referenced BEFORE I made the jump to Lr. One of our members, Linnie, did a very extensive Tips article on just how to do it.  There are also three youtube videos on AE by Todd Olthoff on using AE for the migration process.  I used those as my guide when I made my move.  Unfortunately, there still remains NO easy solution for the RAW+JPEG issue.  What I did was essentially duplicate my Aperture Library in the Folder section with albums coming across as folders using AE.  I only started using Collection Sets and Collections AFTER I started importing all of my new photos into Lr which was Jan 1, 2015.. The albums & smart album set up that I had in my projects in Apertue came across as  folders named Album in Lr:

The “Album-Fleecer Favs” was a smart album and the other folders named “Album-” were regular albums under the Fleecer project.  I had success with using AE, but I did do some of the pre-move fiddling with my Aperture Library that both AE and Linnie recommend.  So for those that are still hesitant about moving everything over from Aperture, stay the course. It looks like so far Apple will support Aperture in macOS Sierra, but time will tell.  For me, it was AE and never look back.

Thanks for sharing your experience, Florian!

Thanks, Joseph.  I should have included the Aperture screen shot of the project. So here it is FWIW:

Hello, just wonder if there is other way to watch the video (e.g. pay separately), if I am not a subscriber. Thanks.

Sorry Winkins, the “Video Tips” are a subscriber-only feature. You can always sign up for a single month and catch up on all the rest of the Video Tips as well!

Some, I hope, relevant observations regarding Aperture, Sierra and Joseph´s recommendation to stay with Aperture for now. That is: do not migrate your library to Lightroom.

I have been running Aperture under Sierra since it´s  introduction on an iMac Late 2013 and a MacPro Early 2008 without any more problems than I had under OS 10.10

and OS 10.11.  Of course is this only valid with my workflow which only includes maybe 80% of Apertures functions. But on the other hand ….I do use plug-ins from

This adds functions to Aperture making it a relevant tool for raw photo editing, and it´s still the best image cataloguing database available. (Yes I have Lightroom 6 on my computers too

and with the same plug-ins.)

Thanks for the info eje.

I am still using Aperture. I have Capture One and am using it for some of my new photos but havn’t yet migrated any of my existing Aperture libraries (it feels like a scary operation :-)).

I was prepared to stay on Yosemite for years but reading your post I am encouraged to try to upgrade the OS to Sierra.

Hi.  Thanks for the video.  Renewed my membership in order to watch.  A couple of comments:

The number of months left where we will be able to run Aperture on an up-to-date machine is probably running down to the point where anyone still using Aperture should seriously start working on setting up an alternative.  (Aperture is said to still work under High Sierra.  I froze my OS at El Capitan until I migrate completely away from Aperture.)

Hi Kirby, thanks for your feedback.

What specifically has changed? I didn't think the Aperture to Lightroom migration tool had changed pretty much since it was launched. Does it have new features? Happy to redo the video but I would love to hear what specifically you feel needs to be addressed.