You had to be quick to see it. Craig Federighi had just finished a summary of the new features in OS X 10.11 just under 20 minutes into Apple’s WWDC 2015. Before turning to performance aspects of El Capitan (as the latest incarnation of OS X is called), we were given a glimpse of other features in a summary keynote slide, with seven of these given the bold font treatment. One of those seven was “Photos editing extensions”.

This is the core feature many of us on this site had been holding out for and its non-appearance in Photos 1.0 had significant ramifications for the remaining Aperture user base, and indeed the overall direction of Joseph's site. It is therefore a welcome sight to see its appearance linked to the next iteration of OS X, underlying the fact that Photos is intrinsically linked to the OS itself and is perhaps an indication of future significant updates being tied to OS updates. Can Photos still rise up to be a pro level editing tool? With the teaser appearance of Photos editing extension this becomes a whole lot more palpable. Will Photos become a pro level DAM? For now that remains as uncertain as before.

I initially posted on the Photos forum my observation, and a fellow poster Pete also pointed to the Apple Developer website where a snippet of further information was given: 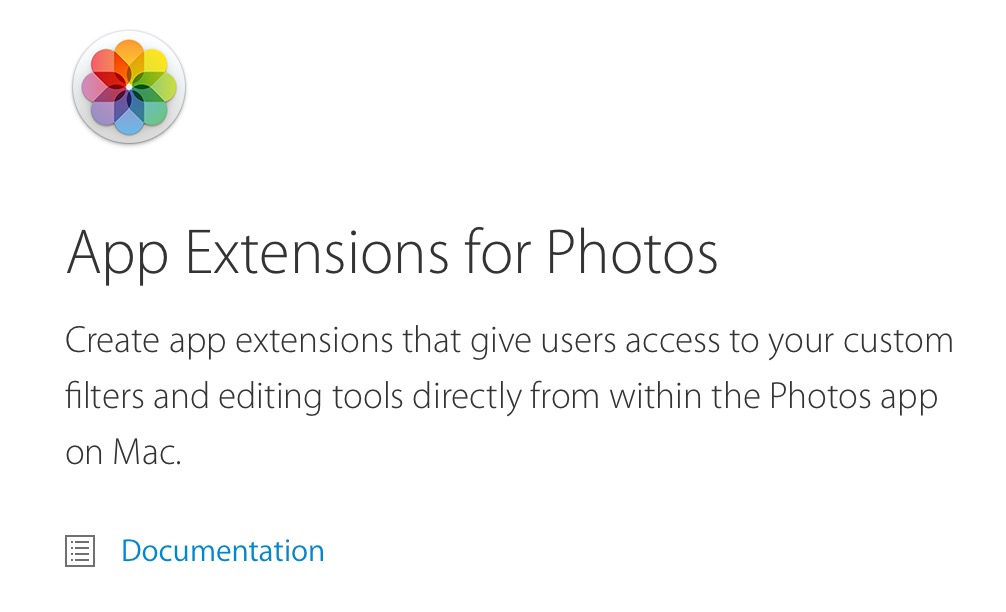 The link to Documentation currently refers to the earlier documentation from last year's developer conference with Photos extensions only in the context of iOS. Hopefully this will be updated soon for some further insights into how extensions will behave in Photos for OS X. Another poster (thanks jollyllama) pointed out the regular Apple site preview page has a little more detail:

Otherwise the Public Beta coming in July will be the one to watch, although even then we may not get to experience extensions until interested developers have come on board. Hopefully that'll be soon.

Did you spot anything else in the keynote relevant to the Photos community?

When I spotted this during the keynote, I was ecstatic.. this was, for me, the biggest announcement in a not so interesting keynote.. The “one more thing” was really disappointing… Tim Cook is using it for the wrong reason.. it used to mean something great was about to be announced (tangible product mostly), not just a rehashed service that failed years ago (iTunes Ping) and was rebranded to another service.

Slowly but surely, Photos for Mac could become what Aperture was but there is ways to go..

Photo extension is a step in the right direction.. Al we need is dedicated developers to make quality extensions that are useful.. I don’t just want to be flooded with Filters galore.. Maybe Swift savvy photogs. could implement a Star/color rating or other DAM improvements through Extensions..

I see that locations can be aded to hotos now, judging from the preview site.. Faces tagging has also been improved.. maybe Apple added Star ratings already but have just not announced it yet… I’ll be watching the WWDC sessions on Core Image closely this week.

Can’t wait for this Fall!

To lower expectations about extensions a bit:

This are “edit extensions” - they allow developers to integrate new filters and edit tools. It is very very likely, that there is no way to integrate “star rating” in any sensible way up to now.

It comes up here and then on this site. There is nothing really special about Swift. It is not a “silver bullet”.  There are no things you could only develop with Swift - you can do anything with Objective C too. For many programmers there is no need to switch to Swift. It is also not really important if “Photos” is written in Swift or Objective C or a mix of it. My guess it is a mix of it. Swift is only interesting from the point of developers about how easy is to write code. Swift offers some features which make developing more comfortable. Swift even can make some things more difficult though - e.g. when integrating Interpreters like Lua or Python.

In addition to external editing, as noted on the Apple site:

1. geotag individual or groups of photos

from Apple’s site:
Everything in its place.

Photos has been fine-tuned to make it even easier to manage your library. Now you can add a location to a single image or to an entire Moment. Naming your favorite people in Faces is faster with a streamlined workflow. You can also sort your albums — and the contents inside them — by date, title, and more.

Re: Swift - yes, there is no need for programmers to switch languages, but its compiler and related developer tools will allow for faster development, in addition to other potential benefits as to it being released as open source.

The other notable feature I was enthused about was that Metal would be supported in OS X. The OpenGL/OpenCL hooks haven’t resulted in great performance gains in the past (maybe one of the updates from Aperture 2 –> 3 or one of the bigger 3.x updates) but those advantages haven’t been clear. This might be the ticket to faster performance for graphics-related apps, but it sounds like apps would have to be rewritten to take advantage of this feature.

Combined, these aspects may be a huge performance boost (as I think Swift compiles with Metal in mind, so the new Swift may in fact be significant in this regard). At this point, I’ll bring up the obligatory rant about why they couldn’t have kept supporting Aperture… and just leave it at that for now since it’s been discussed already, but still! There didn’t seem to be any info on whether these OS improvements would improve older software though.

I kept the faith that this would happen, so I was very happy to see the announcement.  I’m holding out on Aperture until that day comes.  Really hoping that Nik decides to offer extensions, or at least some u-point like clone.  Not sure Google is going to rush out to make extensions for Apple Photos.  Maybe they’ll sell Nik to somebody who actually cares about the apps.

Extensions will be nice as far as they go, but probably will just end up being the usual iOS filters ported to OSX, so they can work across the board. Mostly they bore me, generic filters lacking subtlety that at most you can fade in or out. Can be great for some effects, like B/W film effects or a custom border. On the whole I prefer presets that can be tweaked to your specific photo.

That said, Nik or the like filter effects applied nondestructively on the fly would be great. Affordable VSCO filters could be good too, esp if they finally had a VSCO Cam extension for iOS to match.

But most of the missing features need to be core features you can rely on being there, like lens correction or good noise reduction. And none of these things can compensate for the lack of DAM features. The Photos organisation is geared towards the casual Phone camera crowd, which iPhoto used to cater to, an for that it is fine. But the fact that the Photos importer converts certain features to keywords, like star ratings or flags, attest to the fact there are no plans for their implementation. Maybe public demand could change their mind and they develop an ”expert” addon to provide the metadata tagging and asset management in multiple locations like external drives etc, perhaps for a price on the app store, but I seriously doubt it at this point.

One hope is that we know a lot of Apple engineers are keen enthusiast photographers, and many people they know in the Mac community are, so it is more likely to be an area of interest, provided they can convince their managers of the need to commit resources or let them work on a proof of concept in their spare time.

So far I’ve only played superficially with Photos on my old iMac, setting it up from scratch with only my iPhone and iPad images from iCloud. I’m not ready to upgraded my main machine that I rely on, but hopefully El Capitan will be the stability and bugfixing release a lot of people have hoped for, the new Snow Leopard. As people have pointed out, El Capitan is a vertical structure coming out of Yosemite, a programmer’s metaphor for internal refactoring and bugfixing.

Serious folks, extensions are never going to bring photos to the same level as Aperture. Photos for any professional use is a joke and that is just being kind for the sake of public eyes. So Apple gives you what in Photo’s, the iPhone app on OS X? Photos is the equivalent of iWeb. I think all intelligence in the Apple app development department when it comes to professional apps has evaporated as fast as the California water supply.

I don’t know how anyone can say at this point what Photos will be like a year from now.  No reason some innovative companies couldn’t offer some advanced editing extensions that could match Aperture or LR feature for feature.  The underlying infrastructure is there to support just about any kind of extension.  Sure, there will probably be a bunch of silly filters, but extensions could include advanced selective editing brushes plus and anything else that’s out there now.  I kind of like the idea of picking and choosing from a variety of tool vendors since each one seems to be better than the others at one thing.

Apple would still have to up the level on basic DAM features that can’t be supported through extensions.  Star ratings, much better search and screen handling would be basic requirements.

It’s happening.  Macphun has ported 4 of their apps over to serve as extensions for Photos in El Cap.  Demos up on Youtube.

Nice, I have some of Macphun’s apps. but not all Pro with plugin support. Even so, I was very impressed with Noiseless, and if it is updated with support for Photos, I might use it. If it requires to buy a new version, I wouldn’t bother, as I am only going to use Photos for phone snaps in jpg, not Raws from my SLR. I might well export finalised photos to Photos, but it is not suitable for organising and processing my Raw images. And having to rely on external plugins is far from ideal; apart from being clunky, it is not non-destructive editing.

What makes you say extensions will not offer non-destructive editing? Everything I’ve read says that’s precisely what extensions in Photos will offer. I believe that’s the whole point of going the extension route vs. the old round trip plugin route. Which is also why I see Photos becoming a quite powerful app over time.