A Vintage Lens + Some Funky Curves = A Cool Photo

It's nearly impossible to know these days what effects are in-camera, and which are in-software, especially when it comes to “vintage” looking images. And ultimately; who cares? Sure there are purists who will say “oh, thats not a real photo because you used Photoshop!”, but their numbers are dwindling. At the same time there's a rise of creatives looking to build a look (vintage, modern, sharp, soft, whatever!) entirely in camera, because, why not? 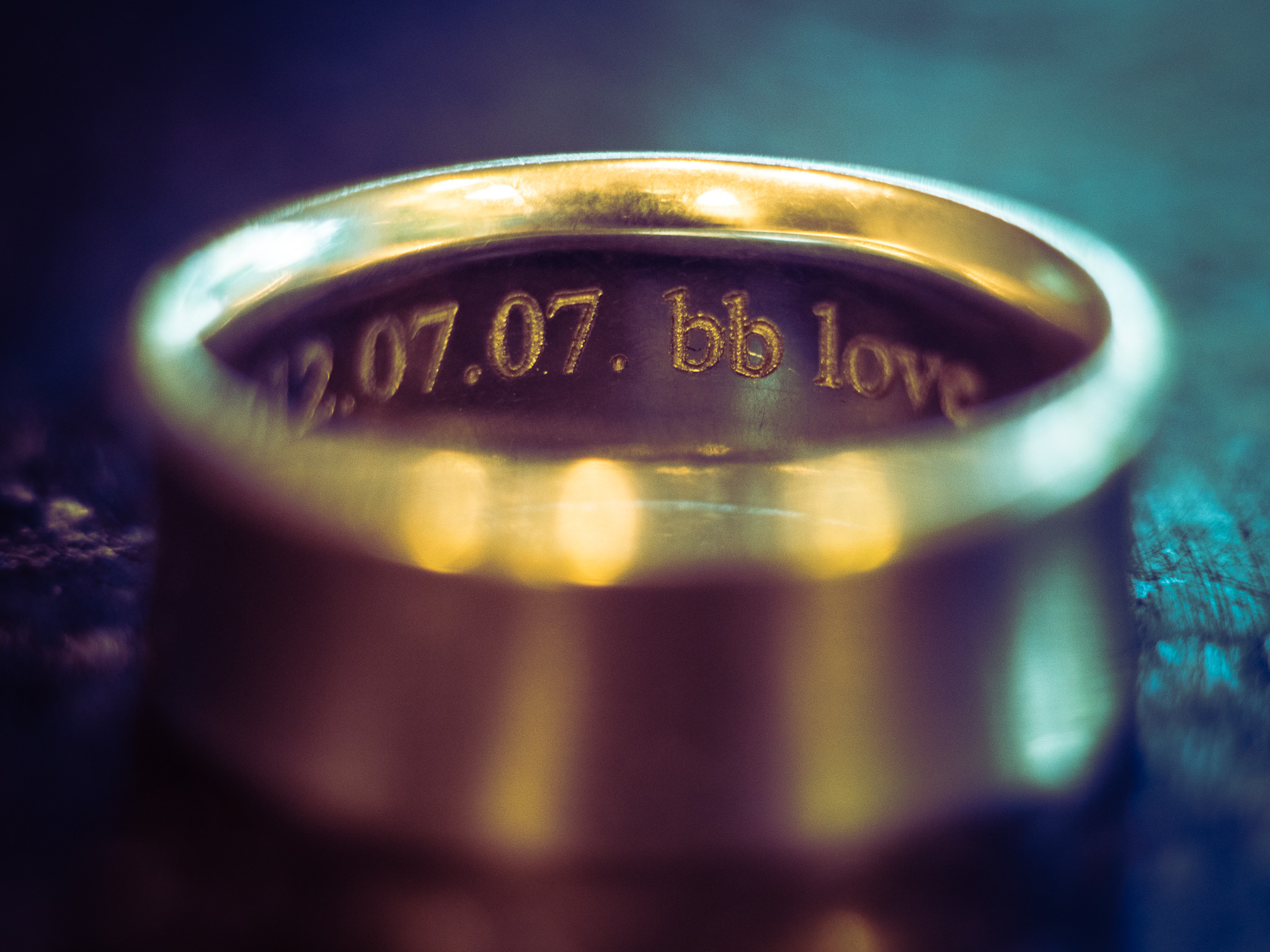 But at the end of the day… who cares? Certainly the consumer viewing an ad for the latest perfume, clothing line or sexy gadget couldn't care less how the image was created. I've yet to have a client ask me how an image was made, unless out of genuine curiosity. I was on a shoot once years ago where I was using a very small camera for a high paying client because I wanted a specific look that the camera delivered, and I remember pausing at one point and explaining myself – explaining why I was using such a silly looking little machine – and the client said “I don't care what you're shooting with… I figure you know what you're doing” (or something to that effect). I never again questioned if my own gear choices were “client worthy” after that.

Which is a long drawn out way of introducing this particular image. Nothing special in it itself; literally just a quick photo on the kitchen counter of my wedding ring on our anniversary because I wanted to make a  photo to post online to celebrate the day, and happened to have a new (old) lens I wanted to play with. The physical distortion of the image is all in the lens. The colored distortion is all in the curves. And so going back to the beginning of this post, this image is a fine little balance of the old ways and the new ways. And that is something that makes me particularly happy.

Last month I did a video on the Lensbaby Burnside lens (embedded here, if you haven't seen it yet)…

…which is a fun (albeit expensive) lens with a unique bokeh, but in the comments someone recommended that I check out an old vintage Russian lens called the Helios 44-2 2/58 (that's a 58mm f/2). 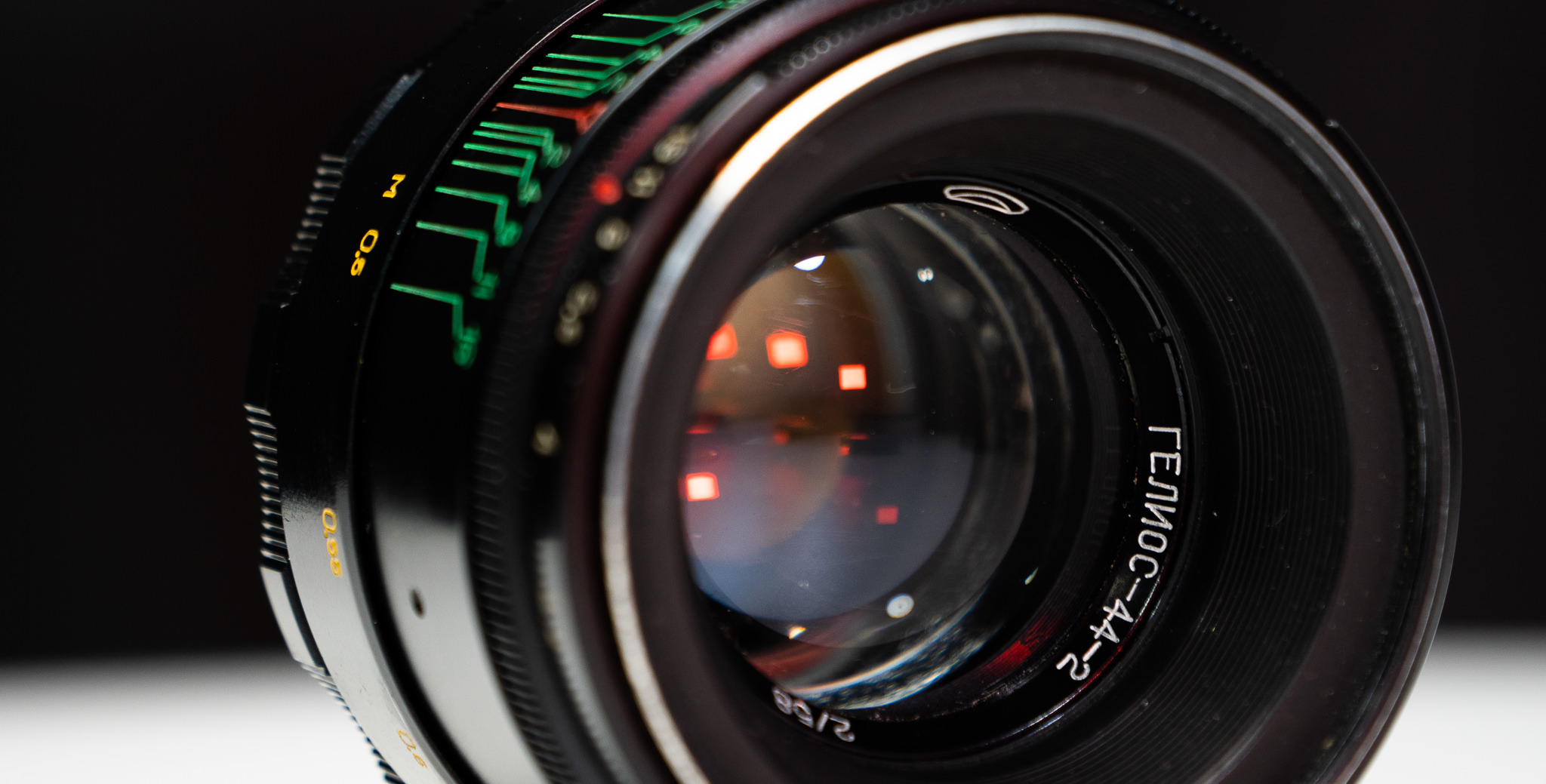 Turns out these things can be found dirt cheap on eBay, (I got mine for USD$25 + $15 shipping from Belarus), and with a cheap M42 to Micro Four Thirds adapter [B&H] or [Amazon.com], I had it up and running on my LUMIX cameras. I love vintage lenses like this because they provide a unique look to the image that is 100% analog and unchangeable. When shooting the world of digital, you have SO many options and SO much control that it can be freeing to give up some of that precision sometimes!

One thing this lens doesn't do however is focus very closely. Well, it just so happens that a few months ago, I'd done a video on a set of macro extension tubes that I really liked. In fact, these have become an always-there part of my go-to camera bag. I don't necessarily always want to carry a macro lens, but these tubes make every lens a macro lens, and they work remarkably well. If you're not familiar with the process, all an extension tube is is a lens barrel with no glass in it that moves your lens farther away from the sensor. The results is that your focusing extremes becomes a lot closer than they are natively — both the close focus distance, and the rear focus distance. Meaning in addition to being able to focus more closely than normal, you will also lose the ability to focus past a certain point, so don't go thinking you can just leave one of these on all the time! Anyway, here's that video…

The tubes are called the MEIKE MK-P-AF3A Automatic Extension Tube [Amazon.com], if you're interested.

Put one or two of those on the Helios lens, along with the M42 adapter, and bam you've got a piece of vintage glass with a close focus capability and some pretty awesome built-in edge madness! 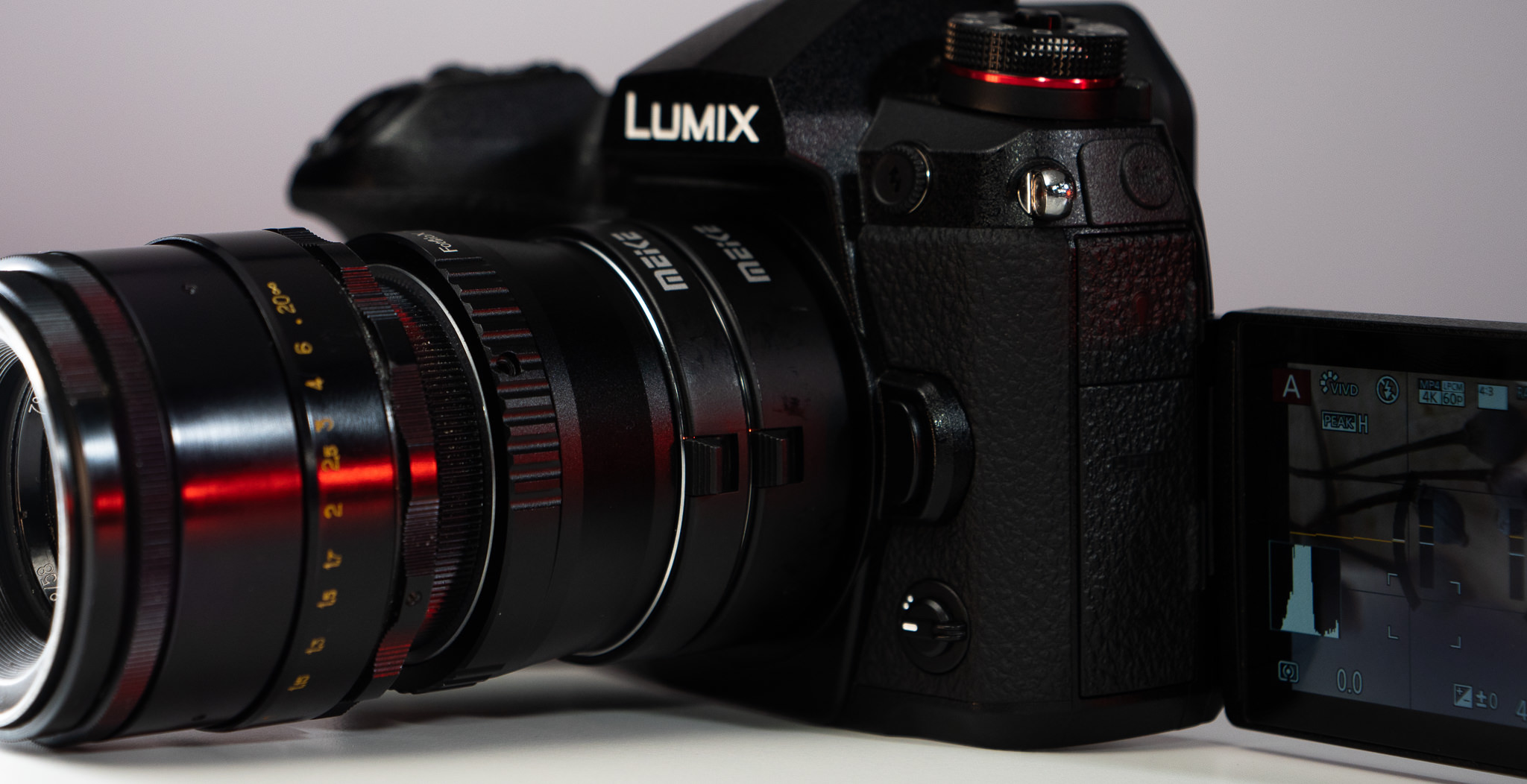 Any photos made with this combination will have some funky blur and distortion, but none of the cool colors. In fact, the image may be quite flat. That's where Curves comes in.

I've been a fan of curves for a loooong time. At their most basic, it's a really quick and easy way to make the shadows darker and the highlights brighter to effectively increase the contrast of an image, but unlike the contrast slider, with curves you get to control the dark and bright areas independently. However if you push past the Luma curve, and look at individual RGB (Red Green and Blue) channels, you can really have some fun!

For example… raise the shadows of the red channel, and you introduce red. But lower those shadows, and you remove red, or introduce cyan. Push the highlights on Green, and you add green to the highlights… or pull them back, and introduce magenta.

By SharkD at English Wikipedia Later versions were uploaded by Jacobolus at en.wikipedia. - Transferred from en.wikipedia to Commons., Public Domain, Link

Anyway, it doesn't take much playing to get to an image like the one created here. And it's not like I went into this with a specific idea of what I wanted in mind. No, I just started playing, pushing the highlights and shadows independently in various directions to various degrees until I saw something that worked for me!

Here's the curves settings. There are other adjustments too in this image, but the curves are certainly the majority of it. 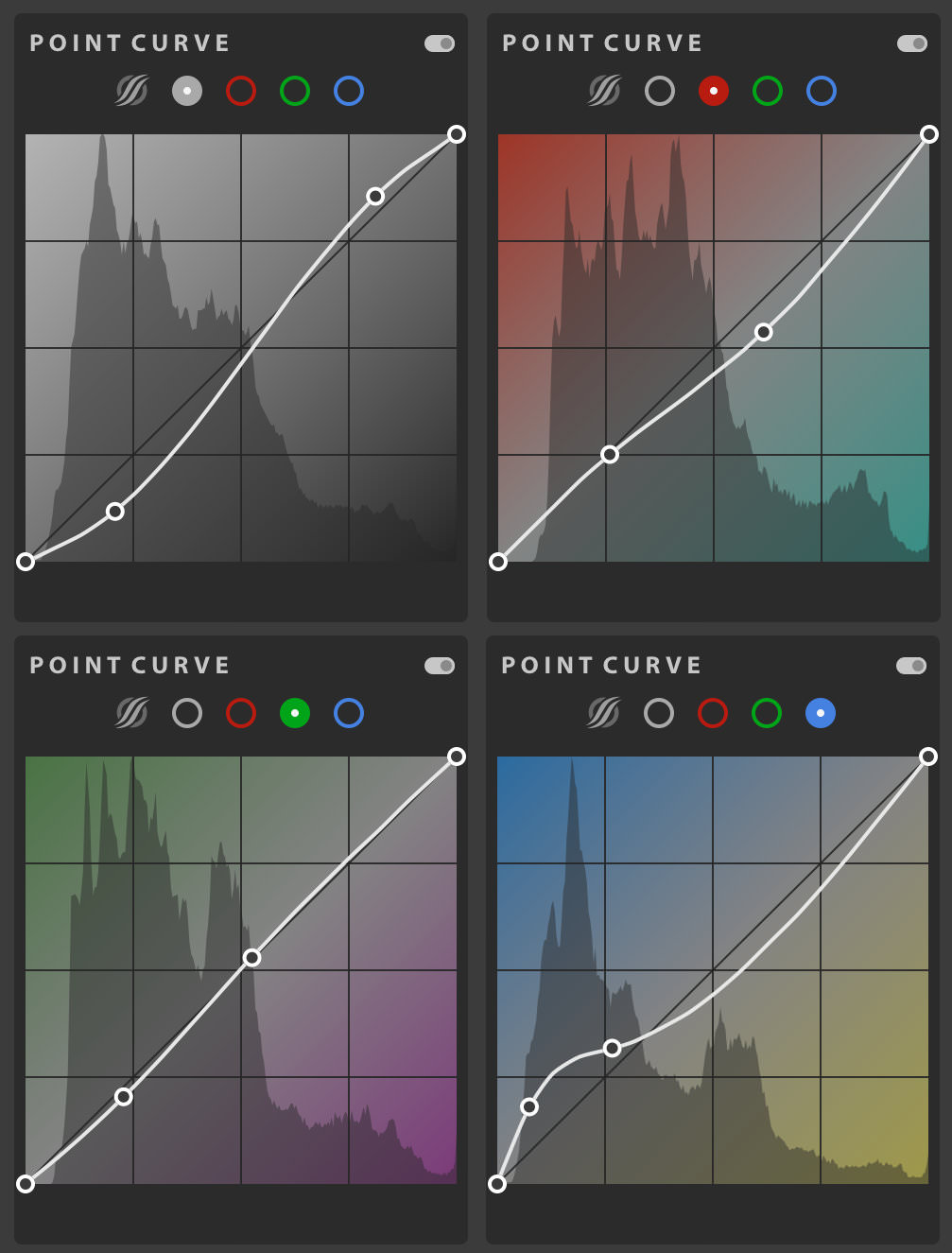 These are the individual Luma, Red, Green and Blue curves settings for the Ring photo

In fact, if you're using Adobe Lightroom CC, I made a preset of this exact setting for you to download. It's unlikely it'll work perfectly on any other photo, but it could be a good starting point.

Here's a before and after so you can see just how far a little bit of curves can take you! 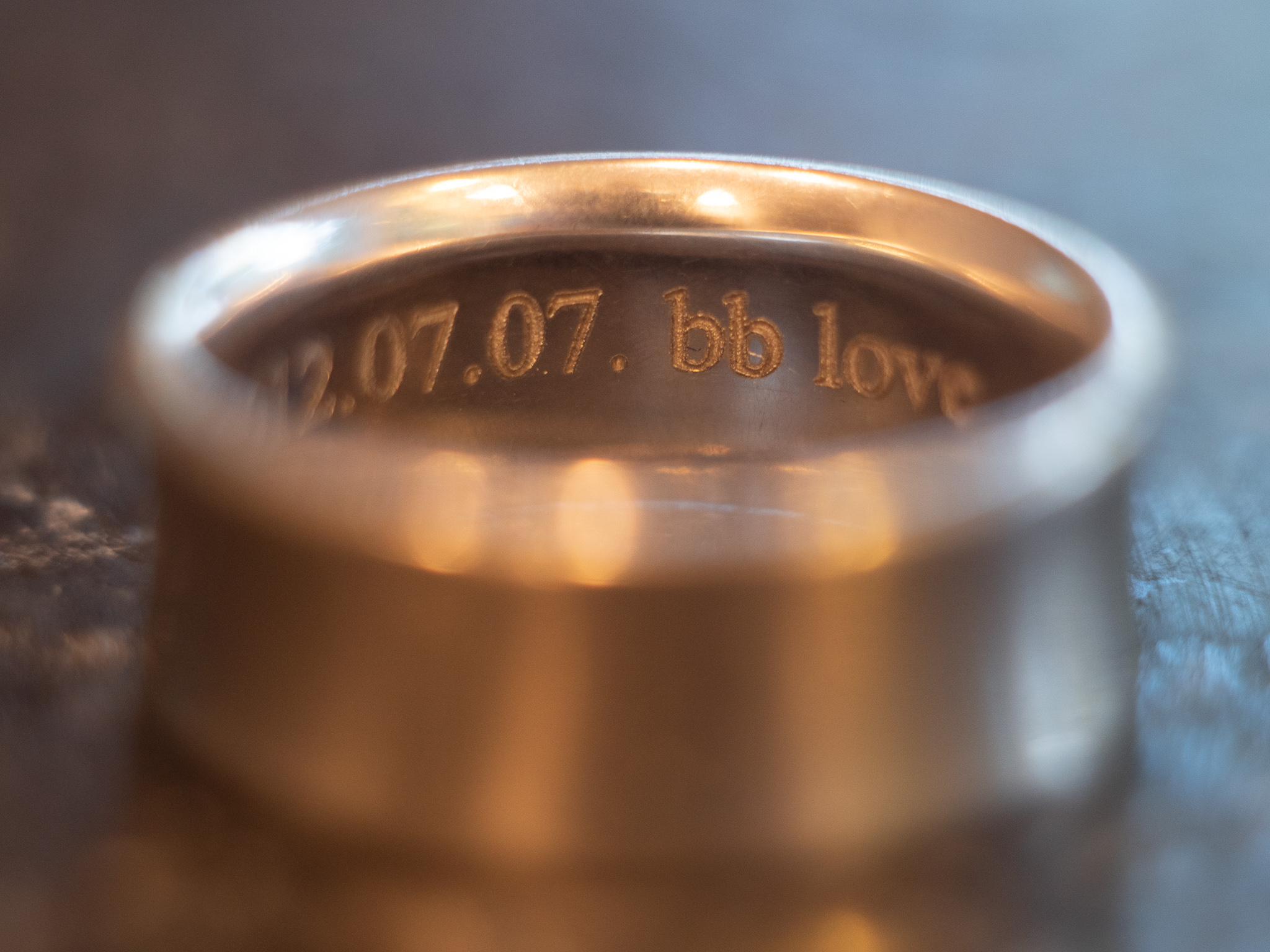 What do you think? Are you a fan of vintage lenses? Do you try to do everything in-camera? Are curves your best friend? Sound off below, and let us know what you think! You can also embed sample photos if you want, so go for it!

This reminds me, if anything, I need to get my hands on Curves, understand what they “mean” and practice, practice, practice….. I like old lens; I have recently moved into Full-Frame and have recovered my original 1995 Canon 28-105 (film Canon 5)  and works wonders: light, good range, enough clarity for outdoors or TTL flashes.

Right on! And yeah, curves are incredible. So much power in one single tool.

I need a DAM to replace Aperture while Luminar get their’s out. Is Photos good and reliable with referenced files? I sent you a question through the Contacts form ….

As a DAM, Apple Photos is pretty good. It has the right organization tools. No real metadata support and no star ratings kills me, but if you can live without those it's decent.