(Scrub to 5:38 — we had an audio issue in the very beginning) This was an incredible conversation, covering virtualizing trade shows, moving messaging from a three-day event to a full-time experience with customer interaction and education, to remote post production and the tools needed to do that, wrapping the conversation back to a way to attempt to replace the social benefit of gathering in large groups and having chance encounters with our peers. Also, Lobots.

Alex Lindsay has been involved in almost part of media production from coding to audio, video, film, web, AR/VR and live-streaming. After working on Star Wars at Lucasfilm and Industrial Light and Magic, he built a global training organization and now uses that experience to help others engage their communities online. He is Head of Production at 090.media.
https://090.media

Felipe is the owner of Cre8ive Beast and a Workflow Architect at Hedge. Having worked at McKinsey & Company and then at Accenture as a Creative Producer and Head of Post Production for Accenture Productions. His team was involved in over 2000 Live Broadcast events per year across an organization of 400.000+ employees. He led a team of Editors in 4 countries and created workflows that allowed his team to collaborate and handover projects every day, delivering over 400 videos a month.
https://cre8ivebeast.com

With a unique understanding of on-set technologies and their relationships in post-production has allowed Gary to act as a guide in the evolving relationship between acquisition, edit, and delivery. Gary is one of the co-authors and tech editor for the original version of the Data Handling Procedures and Best Practices guide used by IATSE Local 600 (Cinematographer's Guild). Gary has been a speaker on cinematography and the related technologies at events around the world, and has presented on various topics at the National Association of Broadcasters Las Vegas convention continuously since 1999, as well as presenting on a diverse array of subjects at NAB Shanghai, IBC Show, Interbee and Broadcast India.
https://garyadcock.com

Chris has a 30 year history of creating broadcast television and corporate video projects that started years before even owning a computer. As a broadcaster and an early adopter of what we used to to call “desktop video”, Chris brings a unique perspective to what we now do everyday.
https://sliceeditorial.com

PhotoJoseph is a content creator, educator and YouTuber — he shoots for corporate and celebrity clients, works with schools globally integrating photography into the classroom, leads workshops, has several photography courses on LinkedInLearning.com, and a regular YouTube show.
https://PhotoJoseph.com

Reply from Lloyd Kenney III
on Sunday, April 5, 2020 - 12:21pm
thanks for all the great content
Permalink

Reply from Dilanchian | Lawyer & Consultant
on Thursday, April 2, 2020 - 3:25am
Thank you PhotoJoseph for this niche topic handled so informatively by you and each of your guests. It's exciting listening to exploration of topics and experience across so many areas required for good content. Each guest is generous in sharing knowledge. Your explanation at 29:00mins of the tech set-up for the presentation marries so well to the most recent video by Chris Judd.
Permalink

Reply from PhotoJoseph
on Sunday, April 5, 2020 - 9:35am
Awesome, thank you and I'm glad you enjoyed it!
Permalink

Reply from Christian Ritchie
on Sunday, March 29, 2020 - 10:29pm
I was absolutely THRILLED to hear Chris Fenwick talk about the Cluetrain Manifesto. I've been an ardent advocate of the books premise since it came out, and even wrote an essay that discussed the failing of business to heed the words, and my belief that it has directly led to Amazon's continued dominance and growth. Taking your marketing materials from the billboard to the AdSense doesn't connect you any closer with consumers, who find ways to block them or ignore them the same way they have started to in 'real' spaces like TV. This radical event has driven many people to make the move to online ordering in ways they never have before, and there is a real danger that some forms of retail will struggle to recover. They are failing to be part of the conversation and part of the story, and they may find that even if they survive the situation right now, their customers will not find a difference or connection large enough to pull them back from the convenience of online shopping.
Permalink

Reply from Chris Fenwick
on Friday, April 3, 2020 - 6:23am
It’s a fascinating look into a crystal ball that didn’t know what to call things but CLEARLY the Cluetrain Manifesto saw the demise of corporate America at the hands of social media VERY early on.
Permalink

Reply from Kevin - The Basic Filmmaker
on Thursday, March 26, 2020 - 4:36pm
Darn! Missed it. What did you use to collab with sux people live please? Looks great!!
Permalink

Reply from PhotoJoseph
on Thursday, March 26, 2020 - 6:30pm
Zoom to bring everyone together, but I streamed it the same way I stream all my shows — screen mirroring through an ATEM Mini and the Pearl-2 for encoding
Permalink

Reply from Blind Spot Gear
on Thursday, March 26, 2020 - 3:44pm
Hi Joseph, I was hooked, from start to finish; very very on point with what creators and small business are facing. Keep it up!
Permalink

Reply from PhotoJoseph
on Thursday, March 26, 2020 - 6:28pm
Thanks Tim, much appreciated
Permalink

Reply from Greg Gibson
on Thursday, March 26, 2020 - 10:27am
This was very good. Great information. Thanks for doing.
Permalink

Reply from PhotoJoseph
on Thursday, March 26, 2020 - 6:28pm
Thank you, and thanks for watching
Permalink

Reply from Shridex Digi
on Thursday, March 26, 2020 - 9:58am
This awesome! Please I am a filmmaker. from Nigeria. I do remote work for AGENCIES, NGO, TECH here in Nigeria for individuals abroad and i can show samples .
Permalink

Reply from PhotoJoseph
on Thursday, March 26, 2020 - 6:28pm
Awesome. Love to hear that. Keep doing what you're doing man… in this crazy time, being able to produce great content will get you WORK right now, for sure!
Permalink 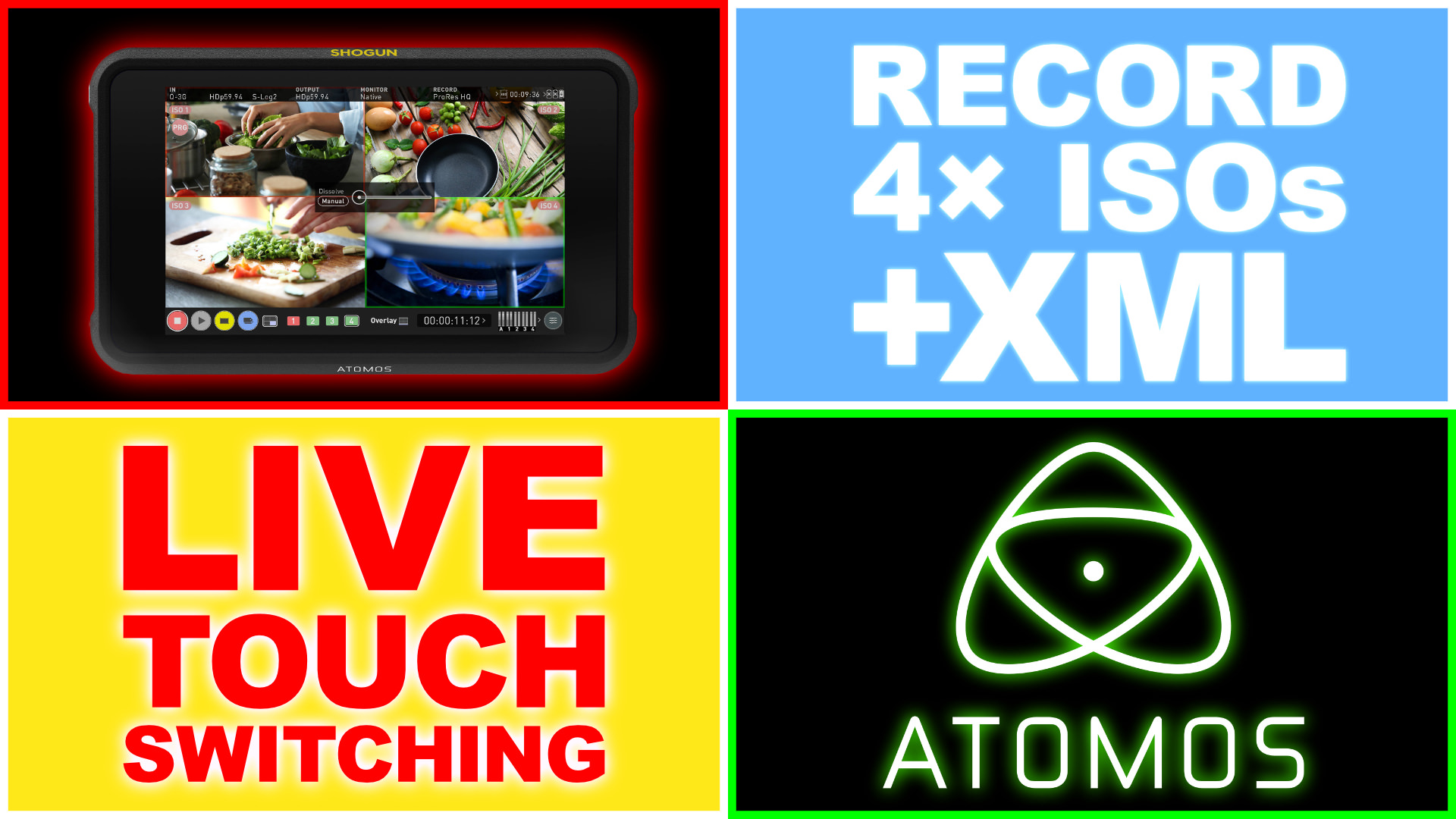 If you've wished for TOUCH based live switching, the ability to record ISOs, and get an XML file for re-editing, the ATOMOS Shogun 7 has granted your wish!