A Good Reason For Larger Previews

I’ve been extolling the virtues of setting preferences for smaller preview images in Aperture 3, and also recommending turning OFF automatic preview generation for many users, for some time now. However Derrick Story, of TheDigitalStory.com has just posted an article related to making slideshows that give a very good reason to use larger previews.

I’m thrilled to see the new User Tips section starting to gain some traction. Remember, I opened this part of the site so YOU guys can post your own favorite tips on there to share with the world. A pile of ‘em just got posted, so be sure to check those out!

I’d be interested to hear your opinions/experiences on this one. Martyn Greswolde of Greswolde Photography in the UK posted advice to his readers that if you run a backup (on referenced masters) while Aperture is running, not only will it not back up those masters, but it could actually corrupt your backup file. The backup solution he’s using is Chrono Sync.

Usually when I import the photos off a card, I’ll recycle the card right away. That’s assuming that I’ve imported and backed up immediately, or imported to the Drobo at a minimum. But sometimes if I’m on the road and I’m just not shooting that much, I may want to import pictures long before the card is full—and would like to leave the existing photos on the card as an extra backup, at least until I’m back home.

Aperture has a nice “Do not import duplicates” feature in the Import dialog, but as you may have noticed, if you rename Masters on import, then this feature no longer works. It relies on matching file names to detect duplicates—so once you’ve renamed your Masters, there’s no name to match.

I’ve seen this question pop up in the forums before, and recently I had a conversation with a user who had some issues storing their master files on a Time Capsule (which technically would be a NAS drive, or “Network Attached Storage”). The attraction to using a NAS (for anything; not just Aperture) is obvious; simultaneous access to your files from any computer on the network, vs. single-computer access off a hard drive.

I’ve always, without hesitation, recommended against storing anything Aperture related on any kind of NAS. There are many reasons I don’t like this idea.

I know it’s seemed quiet on the front page lately, sorry. My summer travel schedule (see last post) has been insane, and the last week is the first I’ve had to catch up. I’ve been on top of all the questions in the forums though, so if you’re looking for recent activity, be sure to peruse there. I have started a few posts for the tips area but haven’t finished them yet; too much going on at once!

An Update, and Loads of “User Questions” Answered!

A short while ago I created a new section on this site called User Tips. I’ve seen some great tips and advice flowing through the Forums, but the problem is that most readers don’t go through the entire Forum, and so may be missing some real gems. So I created User Tips as a place for readers like you to post detailed, advanced tips and techniques that you wanted to share.

Thanks to everyone who entered the twitter contest. By tweeting a simple phrase, you were automatically entered into the contest, and of all the entrants I randomly selected four winners for the $50 “gift certificate” for eBooks on ApertureExpert.com. Join me in congratulating the four winners!

I realized that other than the few samples in the product description itself, I haven’t shared any other examples of the possible results from my ApertureExpert’s PresetPack #1 Looks adjustment preset pack. On a photo walk today that I led as part of another job I’m doing in Ottawa, I made a few photos that I applied the preset “Desaturated Film Look” to. Here’s one sample; click it to see a few more.

I’m running my first Twitter contest, and the prizes are FOUR $50 coupon-codes for the ApertureExpert store! Simply copy and paste the following text into a new tweet (don’t just retweet it… you gotta do a new one!) and on July 4th I’ll randomly select FOUR winners from all who’ve tweeted!

It’s finally arrived! Expanded from 10 tips to 15, this eBook has grown with Aperture. Every chapter has been revised to accommodate changes in Aperture 3, and a bunch of new ones have been added to help you take advantage of Aperture’s newest features.

Read all about it, check out the chapter overview, and of course purchase it here! 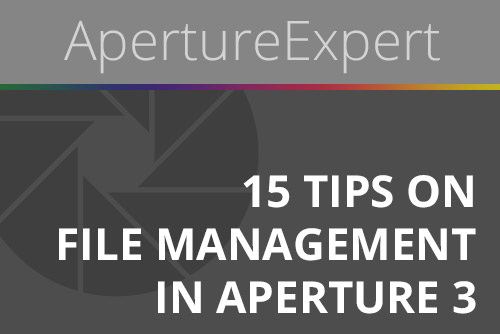 Aperture 3 Vaults; What’s Backed Up, and What Isn’t?

By PhotoJoseph
A user recently asked, “I am realizing that Referenced images are the way to go for my RAW wedding workflow. I don’t know much about Vault. Is this something I use even if my images are Referenced or is this just for Managed images?”. Great question. The Vault can be very useful, but as most users already know, if you’re working referenced, then the Vault doesn’t back up your photos. So what good is it? Learn all about Vaults, and what they do and don’t do in this post.

The title says it all… proper tethering support is finally here! No more Hot Folder actions, no more dropped connections (well at least that’s the idea), no more rubbish Canon software, no more crashed Canon mid-shoot. It’s fast and it works. I’ve just tested this with both the Canon EOS 1Ds Mark III and the 5D Mark II, and it’s beautiful. Here we go.